I’m sure you’re expecting me to give you 10 ways to construct on-page arguments about your product that people with half a brain in their head simply just can’t say no to.

But…. not exactly. (In fact, I might piss some traditional sales people off… but hear me out, will you?)

But first, I want to take you off on a little tangent about social convention.

Specifically, the social convention of telling jokes. (This does have to do with the topic at hand, promise.)

Think for a second about your friend that just kills it with the punchlines. Not the kind from actual, constructed, pre-written jokes, but the kind that makes a funny day-to-day situation so much funnier.

So funny, in fact, you think about it later in the day and chuckle to yourself while strangers on the street look at you like you’re a weirdo.

Where do you think these punchlines come from in their minds?

They’re certainly not researched or well-thought-out to be as optimized as possible for their level of convincing funniness. Because in situational humor, there’s no time for that. Mostly because if they did take the time to think through all of that, their joke wouldn’t be funny anymore. The moment would be gone, and their humor with it.

They also don’t explain the punchline after they say it, do they?

No, it speaks for itself.

And we have a word for people who feel they have to explain their punchlines: annoying.

According to Wikipedia, “Humor is evoked when a trigger, contained in the punchline, causes the audience to abruptly shift its understanding of the story from the primary (or more obvious) interpretation to a secondary, opposing interpretation.”

“Jokes rely on closing gaps of incongruity,” explained Gord Hotchkiss, “a sudden revelation that suddenly allows a situation that highlights a discrepancy to make sense. We master the situation when we ‘get’ the punchline, the source of the humor.”

So, when it comes to jokes, we feel smart when we ‘get’ them because they require a non-traditional shift in thinking. And when we ‘get’ them, we like the feeling of cleverness that comes along with it, and the last thing we need is someone to ruin the moment by telling us why we get it.

What the Hell Does Humor Psychology Have to do With Logic?

Because we don’t like the punchlines we’ve just laughed at over-explained by other people. We enjoy the feeling of our own cleverness to “get it” just as much as we enjoy being able to think for ourselves.

And then when they use petty little “logical” arguments—or so they think—it’s a total turn-off. 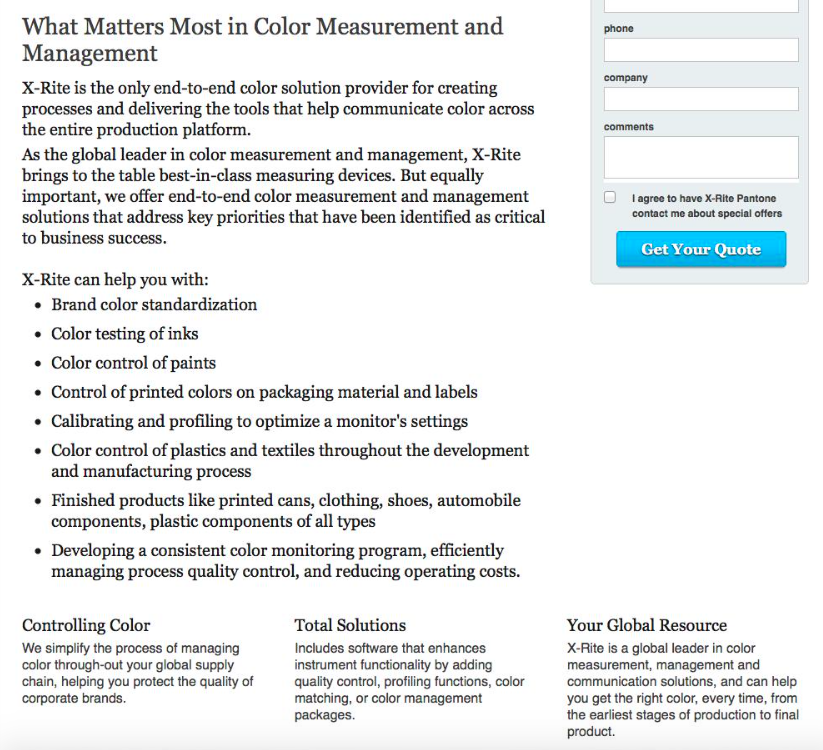 This is a landing page for a quote request that is very much over-explained. I’d be ready to bet money that way less text and something more along the lines of “We get your brand colors right. Every single time.” would be way more effective. It’s not overly-logical, but it does promise what people are looking for.

Look, I’m not saying logic is bad. I love weaving logic into my copy and consider it the conjoined twin of emotion in anything I write.

I just don’t over-do it.

For example, imagine you’re buying a bottle of wine for a night in because you just went through a nasty breakup, and you just need some time to heal alone, along with your dear friend, Bridget Jones.

You’ve decided you’re in the mood for a niche Chardonnay, and once you make your way to the cheap end of the aisle, there are two options in your price range. One’s from a brand called Mind Bender, and the other from a brand called Washington Hills.

You pick up the two bottles to look at the labels to see if there’s any indication of which one you should choose.

This is what you’re looking at: 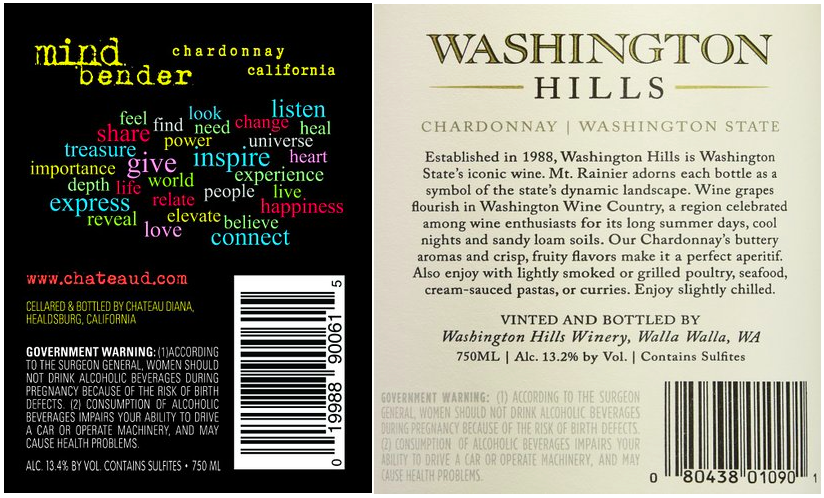 Mind Bender lists out all the emotional reasons why people drink wine as their call to “logic,” and the Washington Hills label has a wonderful description… but at the moment, you don’t care what wine enthusiasts think or how well it pairs with lightly smoked poultry. You just want to feel happy, so you choose the bottle that promises things like happiness, heal, heart, change, power, and inspire. Even though it costs $1.01 more.

Because in the moment, happiness, heal, heart, change, power, and inspire are your justification for buying something that you know you don’t need.

And yes, I realize this is kind of an emotional example, but here’s the thing: logic is about only addressing the most common connections between your product and the main struggles between getting your customer to that buy button.

It’s not about over-explaining logical arguments. It’s not about blabbing on about things they might or might not care about. It might not even be all that much about “logic” itself. It’s about overcoming objections.

Over-focusing on features is not the point. Getting past mental blocks is.

If you’re selling a program that only involves a one-click delivery method, that’s wonderful. But if you start harping on how soon I can have it before my eyes because the delivery is so easy, I might start thinking about it and realize you’re over-charging me because you’re literally doing no work in this transaction. I’ll realize that you don’t interact with me, and that all I mean to you are dollar signs.

Suddenly, all that emotion that you’ve worked to build up in me is out the window, never to be recovered. And it’s a pity, because your course really could have helped me overcome my problem.

“People who believe they can build a case for their side using reason are doomed to be poor negotiators,” said Jim Camp on The Big Think, “because they don’t understand the real factors that are driving the other party to come to a decision.”

You see, it’s very, very important not to spend your time explaining away logical reasons because you will lose people.

So just because a small minority of nit-pickers might want to know how many grueling hours your put into your product production, most people won’t care at all. So that’s a detail you can leave out.

“We buy on emotion and justify with logic,” he said in The AdWeek Copywriting Handbook. “I know that when I first bought a Mercedes and my friends saw it, I told them that the reason I bought it was because of a series of technical features that I found very impressive. The real reason I bought the car was not for the technical features at all. I wanted to own a prestigious car and belong to the crowd that drove a Mercedes. But when I had to explain the reason for my purchase, I ended up using logic—something that I really believed was correct when I used it.”

You see? He didn’t need to be all that convinced to spend tens of thousands on a Mercedes. He already knew he wanted it. He just need enough logic to get him past his blocks… which the list of technical features provided him.

But the reason as many people aren’t becoming your customers are blocking themselves.

They have those OBJECTIONS in their MINDS, which stop them from BUYING. (And that makes your wallet CRY.)

So the entire point of putting logic alongside the emotions is to give the emotion the foundation it needs to keep itself standing… so it doesn’t get knocked over by its own weight and render itself useless.

Emotion is the superhero… but it needs logic. Logic is its irreplaceable sidekick.

None of these superheroes have any chance of ever being their legendary selves without their sidekicks.

Applying this To Your Site Copy: Do This Exercise

Your visitors, no matter how much they know they need or want what you’ve got to sell, will have objections.

And unless you know you’re charging an absolute premium for your product or service, those objections probably aren’t related to price, so the whole value-for-money argument probably isn’t as important as we all want to think it is.

Instead, think about what they’d want to justify in their own minds about buying from you before they feel totally good about it.

Again, it probably isn’t primarily about money. (Remember that Mercedes example? It was far more about belonging than it was cost.)

So what are those non-price objections people have with what you’re selling?

Do your best to think of the top 3-5. Really no need to list out a million. You want to overcome objections, not preach.

“Don’t spend too much time addressing objections that only a small minority of your target market has,” said Antone Roundy on White Hat Crew.

Antone’s advice is good, because those objections just don’t matter. The nit-pickers probably wouldn’t have been customers anyway, so focus your energy around the majority of lost customers that just need that little extra boost in their money-spending confidence.

For example, let’s say you sell accounting software for solopreneurs. Here’s some objections they might have:

You may or may not be exactly on-point, but that doesn’t matter. What matters is you start to disperse the tension of questioning whether or not your product is worth it, both emotionally and financially.

The point is to start figuring out things that you can test to see which objections are strongest amongst your target market. (Surveys as to why people end up not buying would give you a HUGE jumpstart here, if you’ve got the resources to invest in that.)

Now go back to your notes from the last post on emotion and start pairing ‘em together in ways that make sense for your page. 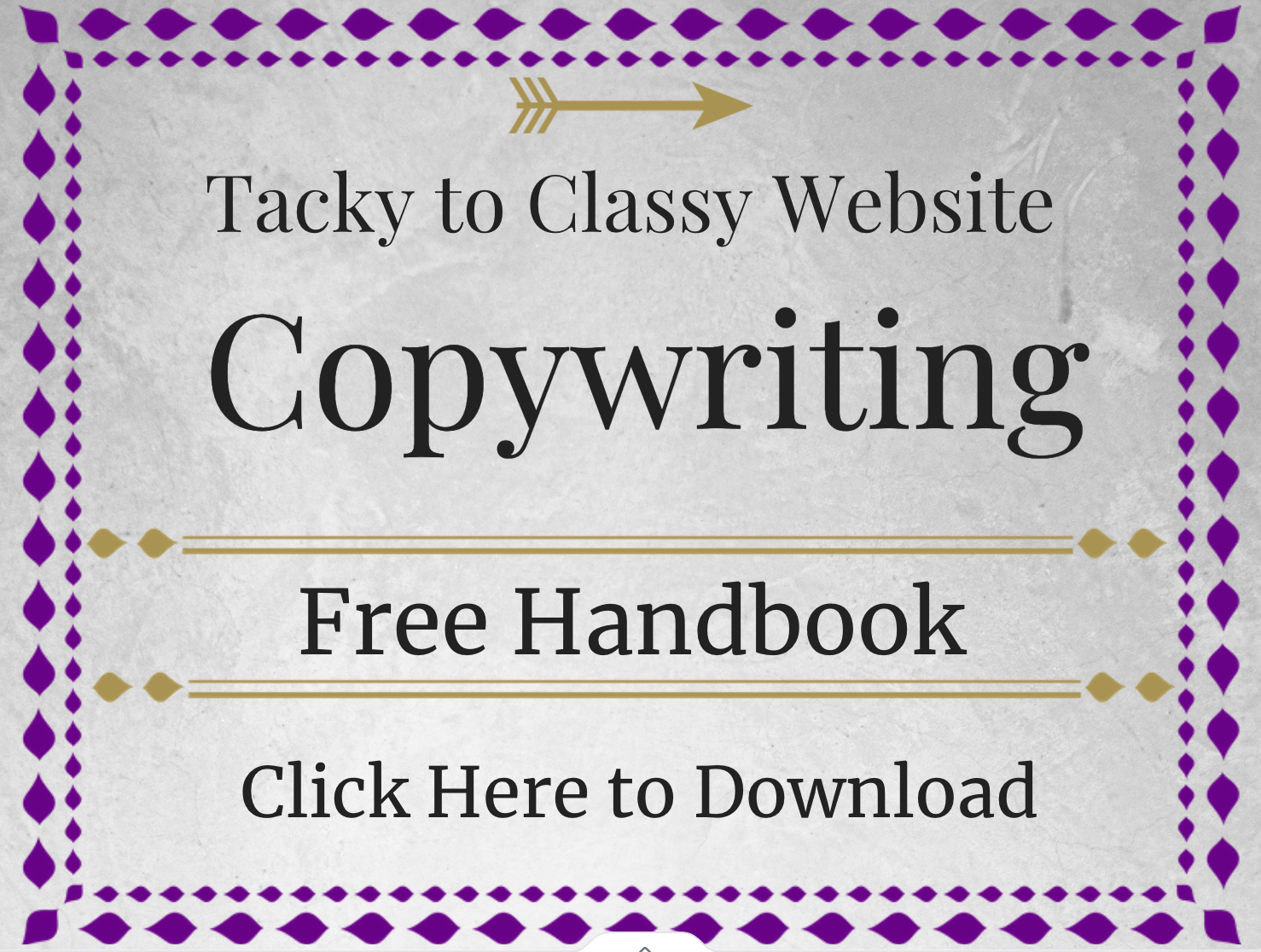